The novel follows one Kaerion, a former paladin of Heironeous who fell from grace a decade ago when he was captured by the forces of Iuz in Dorakaa. Gerwyth is his erstwhile elven companion. The novel also follows one Durgoth, a priest of Tharizdun who has allied himself with the Scarlet Brotherhood in order to secure the release of his imprisoned deity. We get to see a lot of the bad guys on their own in this novel, which is something I always like, but not enough that every twist and turn of their scheme is revealed to the reader.

The villains were very well handled, and I like the rivalries, jealousies, and different agendas of some of the characters. Durgoth, on the other hand, has discovered, through some pretty vile but fascinating means, that a key to releasing Tharizdun can be found within the tomb. I found the writing and characterization of this novel to be very well-done, and the pacing was excellent.

This is another fine example of using a location-based adventure for purposes that go far beyond the original module; in this case, setting up the cross-purposes of the cleric of Tharizdun with the more mundane loot-the-tomb mission of the Nyrondese. There is some good detail about Rel Mord, the Rieuwood, and the Great Swamp that can be used in an RPG game, and even some new geographical details added in the map in the front. 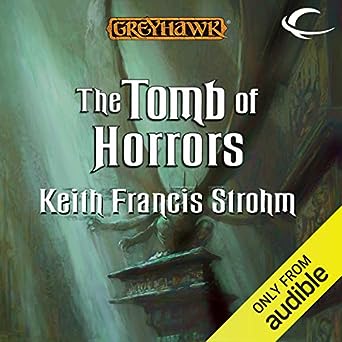 All in all, I enjoyed this novel tremendously, and only wish that Mr. Strohm had been tasked with bringing some of the other classic Greyhawk modules to life. How much of the novel takes place in the Tomb itself?


And how many of the classic features like the Devil Face or the Bleeding Doorways make an appearance? Enter your mobile number or email address below and we'll send you a link to download the free Kindle App. Then you can start reading Kindle books on your smartphone, tablet, or computer - no Kindle device required. To get the free app, enter your mobile phone number.

Would you like to tell us about a lower price? If you are a seller for this product, would you like to suggest updates through seller support? Kaerion Whitehart, a former paladin turned mercenary, and his elf companion join a band of patriots on a mission into a haunted, legendary tomb, where a long-dead wizard becomes the prize between warring factions and the key to both death or redemption. Read more Read less. Special offers and product promotions Amazon Business : For business-exclusive pricing, quantity discounts and downloadable VAT invoices.


Create a free account. See all free Kindle reading apps. Start reading Tomb of Horrors Greyhawk on your Kindle in under a minute. Don't have a Kindle? Synopsis Kaerion Whitehart, a former paladin turned mercenary, and his elf companion join a band of patriots on a mission into a haunted, legendary tomb, where a long-dead wizard becomes the prize between warring factions and the key to both death or redemption.

Partilhar Incorporar. This labyrinthine crypt is filled with terrible traps, strange and ferocious monsters, rich and magical treasures, and somewhere within rests the evil Demi-Lich. Included herein are background information, the Legend of the Tomb, and possible locations for the tomb on the World of Greyhawk map. Also included are DM notes, characters specially designed for the module, and numerous illustrations to be shown to the players.

For characters levels It was likely published in fall Origins I : It Came from California. He did not attend. Sometime around , Lucien sent Gygax an adventure set in a tomb that reportedly featured a lich as the final monster.

This encouraged Gygax to create his own "Tomb of Horrors". He credited Lucien with "inspiration" for the idea.

Origins II : Mr. Gygax's main purpose in creating "Tomb of Horrors" was to take his players down a peg. Gygax's "expert players" were both able to survive the tomb. Robilar famously brought in a squad of orc hirelings as trap-finders; they died in the first hallway, but Robilar still made it to the finale with Acererak and managed to stuff piles of loot into his bag of holding before escaping with his boots of speed.

Although one report incorrectly claims that Tenser killed Acererak, the truth is that "when Tenser saw the nature of the tomb he simply retired from it not caring to risk life and limb for whatever treasure it might hold. Terry Kuntz's Terik is also reported to have taken the better part of valor!

He had "a lot of equally difficult places in the Greyhawk Castle". But, those were many levels down, while "Tomb of Horrors" was the adventure that characters could walk into That's probably why "Tomb of Horrors" was the adventure that Gygax used to carry around in his briefcase, ready for "fans who boasted of having mighty PCs able to best any challenge". Origins III : Origins. Groups of 15 players came together to play random characters that were assigned to them in alphabetic order. They ranged from a 4th-level fighter to a 12th-level magic-user.